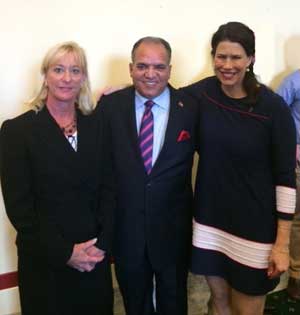 The TCA contingent spoke before the House of Representatives on Sept. 29, 2014 discussing a range of treatment matters from the Redeem Act to veteran-specific issues.

Samaritan Villages Director of Research & Evaluations Dr. Janetta Twerell shared her expertise on specialized treatment for veterans. A pioneer in veteran-specific treatment for nearly 20 years, Samaritan Village oversees three residential treatment facilities for veterans, including one exclusively for women, and administers the federally-funded Supportive Services for Veteran Families program, which assists New York veterans and their families at risk for homelessness.

At the briefing, Hernandez and Dr. Twerell were joined by Dr. Dean Krahn, Acting Director of Mental Health Operations at the Department of Veterans Affairs; Melissa Fitzgerald, Senior Director of Justice for Vets and former actress on the television show "West Wing;" and Dan Caddy of the Army National Guard and President of Battle in Distress.

While in Washington, DC, Hernandez, Dr. Twerell and the TCA representatives participated in the Fed Up Rally on Capitol Hill. The event called to end the epidemic of addiction and overdose deaths attributed to heroin, prescription drugs and other opioids. More than 2,000 people attended the rally, including medical experts, advocates, and individuals affected by addiction.