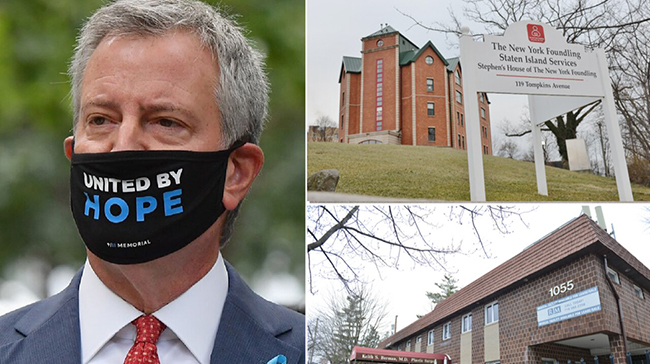 “With nearly 1,000 Staten Islanders experiencing homelessness citywide, but only one shelter currently serving the borough, these two high-quality facilities will give New Yorkers experiencing homelessness the opportunity to get back on their feet safely, closer to their anchors of life in these unprecedented times,” a spokesperson for DSS-DHS said.

According to the information shared, the Grasmere site at 1055 Hylan Blvd. and the Stapleton site at 119 Tompkins Ave. will be staffed with comprehensive social services and 24/7 security.

Both sites will use existing structures that will be converted into the shelters.

The city has held community-requested public hearings after announcing new shelters, including after it announced the site of a massive shelter for families under construction at the intersection of Bay Street and Victory Boulevard.

The Grasmere site will be at the location of a former doctors’ office at Hylan’s intersection with Steuben Street, and will be operated by the Institute for Community Living. Single women receiving shelter there will need to be over the age of 50, including those with mental health challenges.

The Stapleton site will be located at the site of the former New York Foundling building, and will be operated by Samaritan Daytop Village. That facility will be for adult men, including those facing mental health challenges.

For security, DSS-DHS committed to both sites having a minimum of two security officers at their entrances to control building access and to monitor security cameras, which will be located throughout the buildings and grounds around the sites.

Services at the sites will include case management, individual and group counseling, permanency planning and housing placement assistance, along with on-site medical and mental health services, according to DSS-DHS.

Borough President James Oddo first learned of the planned sites Tuesday, and said his understanding was that the information would be shared with other elected officials and community boards later in the day. DSS-DHS confirmed it notified the community Tuesday.

Oddo said he was aware of opposition shelters have received across the five boroughs and that he expected a similar response to the two announced Tuesday.

Pre-Notification Not Yet Required

The amount of notice given on the two new shelters is in line with the average notice of 200 days that communities have received as part of Mayor Bill de Blasio’s “Turning the Tide” initiative first announced in 2017.

Notice does not have to be given before a shelter is sited since the city considers shelters to be emergency resources.

The city has held community-requested public hearings after announcing new shelters, including after it announced the site of a massive shelter for families under construction at the intersection of Bay Street and Victory Boulevard.

Gov. Andrew Cuomo signed a law late last year that requires the city to notify the community before it sites homeless shelters.

However, that legislation, which State Sen. Diane Savino (D-North Shore/Brooklyn) and Assemblyman Charles Fall (D-North Shore) brought to their respective chambers, doesn’t take effect until a year after the governor signed it.

“Had the law Assemblyman Fall and I authored been in effect already we would have had advance notification of the project, not finding out the same time as the press,” Savino said.

So far, the city has started operation in 44 shelters, and identified 87 sites for the 90-site goal it set at the start of the “Turning the Tide” initiative, according to DSS-DHS.

Those include one Staten Island site already in operation sheltering 100 homeless people, and the site under construction at 44 Victory Blvd. that is expected to shelter approximately 500 mostly women and children. It hasn’t yet been made clear when that shelter will open.

According to the city’s “borough-based” approach, those shelters are meant to be prioritized for the almost-1,000 Staten Islanders experiencing homelessness. Usually, the city identifies a homeless person’s borough through their last known address.

Oddo, along with multiple other elected officials, expressed opposition to that site at 44 Victory Blvd. when it was first reported in January 2019. At the time, the city said there could be more sites planned for the Island.

He said his office will reach out to the operators announced for the two new sites to get more specifics on their plans, but that given legal precedent around opposition to other city shelters there was little that could be done to stop the process.

While Oddo conceded that he might be drawing lines between unconnected dots, he couldn’t help but compare the city’s handling of the pandemic on Staten Island and its siting of homeless shelters in the borough.

In the early days of the pandemic, the city’s focus was on its public hospital system, of which no sites are located on Staten Island, and vaccine sites located on the borough have been slow to come.

“The city delivers on the city’s needs, and Staten Islanders have to fight tooth-and-nail at every turn for what Staten islanders want, and this is just another reminder of that,” Oddo said.