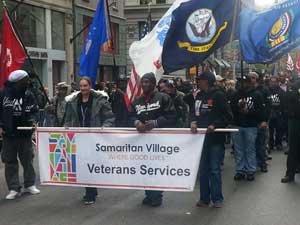 Continuing a long-held tradition, veterans from Samaritan Village volunteered in the 2014 Americas Parade in Manhattan on November 11. The nation's largest Veterans Day event, the Americas Parade is organized by the United War Veterans Council. Each year Samaritan Village offers volunteers from its Ed Thompson and 43rd Street Veterans Residential Programs to help prepare, set up and break down parade equipment. The clients also acted as security and greeters for City officials including New York City Mayor Bill de Blasio, who marched in the parade.